Does the Bible legitimise rape? A response to Benjamin Law | Third Space
Loading...

Does the Bible legitimise rape? A response to Benjamin Law

Does the Bible legitimise rape? A response to Benjamin Law 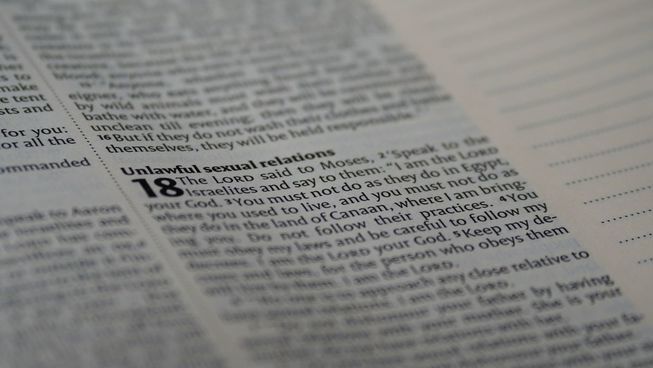 At the Brisbane Writer’s Festival Great Debate one of the speakers, Benjamin Law, referenced some of Bible as part of his argument to prove that reading the Bible was not good for you.

‘If a man happens to meet a virgin who is not pledged to be married and rapes her and they are discovered, he shall pay her father fifty shekels of silver. He must marry the young woman, for he has violated her.’

The implication, the Bible legitimised rape and so was misogynistic.

Let’s explore the text he referenced a little more closely. It is below in full. It comes from Deuteronomy chapter 22. I’ve divided this up into three instructions. They flow one after the other in the text.

If a man happens to meet in a town a virgin pledged to be married and he sleeps with her, you shall take both of them to the gate of that town and stone them to death—the young woman because she was in a town and did not scream for help, and the man because he violated another man’s wife. You must purge the evil from among you.

But if out in the country a man happens to meet a young woman pledged to be married and rapes her, only the man who has done this shall die. Do nothing to the woman; she has committed no sin deserving death. This case is like that of someone who attacks and murders a neighbour, for the man found the young woman out in the country, and though the betrothed woman screamed, there was no one to rescue her.

If a man happens to meet a virgin who is not pledged to be married and rapes her and they are discovered, he shall pay her father fifty shekels of silver. He must marry the young woman, for he has violated her. He can never divorce her as long as he lives.

This is found at Deuteronomy chapter 22 verses 23-29

This Old Testament law was not about legitimising rape but rather about protecting the rights of women and men and deeply valuing our human sexuality. Take the first instruction. Here the rights of the man, who was going to marry the virgin, are protected. She was pledged to him and so from the Bible’s perspective his body belonged to her and hers to his. The man who raped the woman ‘violated another man’s wife.’ Marriage and sex are so highly valued that they are protected by a law like this.

But, what about the woman? The assumption here is that if she did scream or cry out people would hear and intervene because they value her. This is also an act of protection for if she does not cry out then her life is forfeit. This seems brutal but again it is an act of protection because it protects sex and truth in the society. It would be easy for a woman to lead a man on, have sex with him, but then cry out ‘rape’ and so have him disposed of. Imagine how quickly society would disintegrate if women or men could use sex like that?

The second instruction again is one of protection. It recognises that a man could force a woman to have sex with her. He could rape her and no one would be able to protect her. And so the man is put to death. This harsh law, demanding death for rape, is an act of protection. It protects a woman’s body and her sexuality. The magnitude of the punishment reflects just how valuable God esteems a woman’s body. It is so valuable that the man’s life is taken.

But what about the third instruction, where a woman’s body is valued at 50 shekels of silver and she has to marry the perpetrator? This one does jar but some reflection and a bit of digging in the Bible reveals that a superficial and judgmental reading of this passage would be a great mistake.

Firstly, how valuable is the woman’s body and her sexuality? A shekel weights about 11 grams and would be worth about $10 in our modern economy. But how much was a shekel worth more than 3000 years ago?

In the book of Numbers, when each firstborn in the nation of Israel was redeemed, life is valued at 5 shekels (Numbers 3:44-47). Yet in Deuteronomy, the woman’s body and purity is valued at 50 shekels - 10 times the life of a Israelite. If a slave was wounded by a bull, then there was a payment of 30 shekels of silver and the bull, a very expensive creature, had to be killed (Exodus 21:31-33). How valuable is the woman’s body? More valuable than life.

But what about the forced marriage? Again this is an act of protection. In the ancient world, if a woman was not a virgin then no man would marry her. She is tainted and so her life and hopes and dreams of a family and a community are broken and smashed. She would remain a spinster or may have to turn to prostitution with no husband to care and provide for her. The demand that the man marry the woman protects her. If he takes her virginity then he must marry her. Her sexuality is so essential to her personhood and womanhood that if a man has sex with her he is committed to her for the rest of his life and hers. An incredible value is placed on sex and a woman’s rights to her body.

Surely the consequences would make a man think more than twice before raping a woman. It will cost him all and probably more if it is discovered.

So, is reading the Bible good for you? In this case, I’d argue yes because it challenges our devaluation of sex and a woman’s body in the name of freedom.