Do dog's have nine lives. too?

Do dog's have nine lives. too? 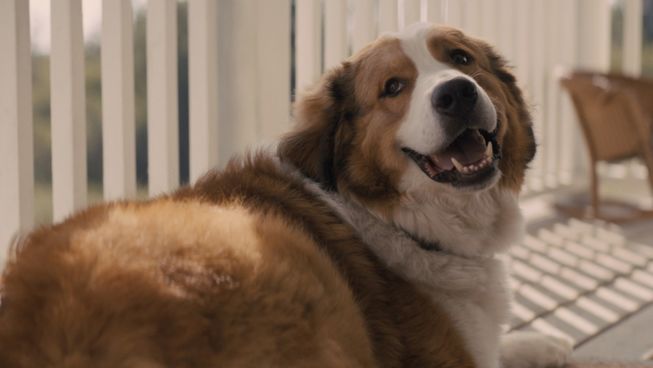 Author William Cameron has managed to come to prominence by writing books of the transcendent life of our canine friends. A Dog’s Purpose spent a year on the New York Times Best Sellers list and was made into the hit film starring Dennis Quaid (I Can Only Imagine) and the voice of Josh Gadd (Beauty and the Beast). His books of the spiritual and physical journey’s of dogs continue to provide fresh stories for families to consider the conscienceless of pets while laughing and shedding a few tears in the process.

A Dog’s Journey is the sequel to the Cameron’s original novel, showing the continued adventures of Bailey (Gadd), the St. Bernard/Australian Shepherd mix who found his original owner, Ethan (Quaid). The farmer and his best friend have aged over the years, but live in a wonderful life on the farm with Ethan’s wife, Hannah (Marg Helgenberger). In recent years, the couple has taken their daughter-in-law, Gloria (Betty Gilpin) and granddaughter, Clarity ‘CJ’(Emma Volk/Abby Ryder Forston), in at the farm, because of the death of Hannah’s son who was the husband and father to the mother and daughter. Despite their best intentions, Gloria begins to feel that her in-laws are getting between her and her daughter and chooses to leave to try to make their own way in the world.

Even though he had transcended time to find his owner, Bailey had begun to play an internal part in the care of CJ before she left the farm. Upon his eventual death, Ethan charges the dog with finding and looking our fo the little girl. In a similar twist of reincarnation to the original story, the furry companion comes back to life as a female beagle named Molly. Born in the same neighbourhood as Gloria and CJ, the dog manages to find a grown version of the little girl and sees the purpose of this new life, to care for CJ thought her life. Through the hills and valleys of her life and a series of different lives, Bailey must do everything possible to stay close to his girl.

Who would have thought that there would be a market for a family film about a dog dying multiple times in a film? A Dog’s Purpose brought in over $200M(US) world-wide and proved that people must be willing to engage with the transcendental aspects of a canine’s life cycle. Depending on one’s view of reincarnation as a narrative vehicle may determine how to view this sequel, A Dog’s Journey. As a work of fiction, this story looks to be a tail-wagging journey of a dog’s loving devotion that spans multiple lifetimes. For those who dig a bit below the surface and see the theological implications of this concept, this movie has the potential to be a difficult story for families to embrace.

Between the cute dogs and the harrowing story of the poor girl who is trying to find her voice in a modern society, this has all of the earmarks of a heartwarming and family-friendly option at the local cinema. Then to add the loveable voice over work of Josh Gadd, it could be easy to overlook the underlying message of the film. It is when you realise that you are experiencing the trauma of seeing a dog die over and over again that any parent has to wonder why this is an option for children. To see the depiction of a dog’s devotion is not new, but does provide a special place in any culture. Why anyone would choose to put themselves through the emotional roller coaster of seeing these loving animals dying multiple times is a whole new level of mental anguish that should be considered before seeing this film.

Do all dogs go to heaven? In William Cameron’s world, not unless they have fulfilled their purpose in this world. The dog’s in this fictional world must endure a viscous cycle of life and death until they meet the objectives of their lives. Maybe the better question is if dog’s really think that hard about their existence at all? As you look at your dog chase his tail again and again, I think the answer is evident.

REEL DIALOGUE: What does the Bible say about reincarnation?

Definition of reincarnation - Being reborn in another body. Several religions, including Hinduism, believe that the human spirit returns to Earth in different forms again and again as it strives for perfection.*

Hebrews 9:27 - And just as people are appointed to die once, and then to face judgment

After watching A Dog’s Journey, it is not too hard to jump from dogs to people on the topic of reincarnation. Interestingly, a recent survey stated that 25% of American Christians believe in reincarnation, even though it contradicts the teachings of the Bible.

What we can know from the teachings of the Bible and most theological textbooks is that man is the special creation of God, created in God’s image with both a material body and an immaterial soul and spirit. He is presented as distinct and unique from all other creatures—angels and the animal kingdom alike. Which means after death, we do not return as another human, an animal or even a cute puppy. The lesson does not stop there. While man’s body is mortal, at death it decays and returns to dust, our souls and spirits continue on either in a place of torments for those who reject Christ or in paradise (heaven) in God’s presence for those who have trusted in the Saviour.(1)

Where could I go to find out more about world religions?

Check out this great review of Rodney Stark’s book, Discovering God, by the Centre of Christianity’s Simon Smart

The journey toward the emotional interior
Reel Dialogue
Russ Matthews 3 Dec 2019
Why do I feel empty after watching this film? That was the plan
Reel Dialogue - A Dog's Way Home
Reel Dialogue
17 Dec 2018
Win a family pass to the latest Sony release (Admit 4)