Why does Hagia Sophia matter?

Why does Hagia Sophia matter? 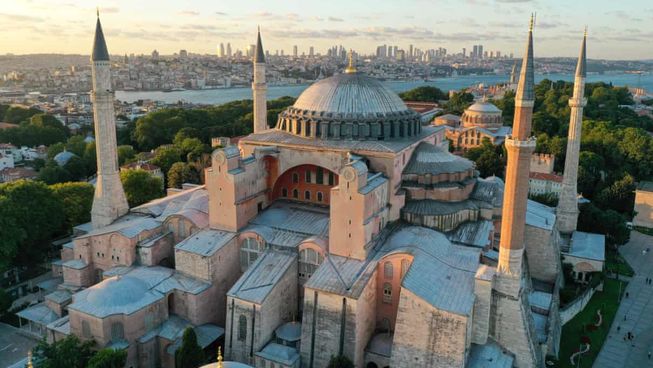 On the 24th of July the church of Hagia Sophia (Holy Wisdom) again rang to the call to Friday prayer (adhan) from its attached minarets following the decision handed down by the Turkish High Court. Their ruling overturned the 1934 decree of the first President of Turkey Mustafa Kemal Ataturk that turned the mosque into a museum.

Many people, particularly within Eastern Orthodox churches, will be outraged and I have seen on social media calls for mourning of the loss of such a great icon of Christian history. For many generations Hagia Sophia was the largest and grandest church in the entire world.

However, for the most part when I look around both our broader Western society and church there is hardly a voice raised. I think for the most part it is ignorance that has most people in her grip. As a society we have lost our historical perspective, we have become obsessed with the ‘now’ and the ‘practical’. I also believe that this is down to the fear that has gripped us. If you voice an opinion or idea that goes against the dictates of our ‘progressive/woke’ masters and ‘modern sensibilities’ you are immediately labelled a ‘racist’ or ‘Islamophobic’ (whatever these terms mean today!). Thank God I don’t have Twitter.

I will attempt to show why we all, both Christians and secular society, should care deeply about the unfolding events in Turkey that have in reality been building for the last decade and more. First, I will address the secularist and look at the legacy of Ataturk.

Ataturk holds an interesting place for me as a proud Australian and historian. He was one of the commanders of Ottoman troops who fought against ANZAC forces in the Gallipoli campaign during the First World War. In fact, he was involved in the efforts that prevented an Allied victory. He was also an avowed secularist and strived to build a Turkish state founded on ‘Western’ democratic values and religious toleration. Whilst by no means a ‘perfect’ achievement, Ataturk bears much of the responsibility for the construction of the ‘secular state’ in Turkey, (one the West has become accustomed to) since WW1.

He was also particularly scathing in his remarks regarding Islam and religion:

“Islam, this absurd theology of an immoral Bedouin, is a rotting corpse which poisons our lives”.

“Possibly it might have suited tribes in the desert. It is no good for modern, progressive state. God’s revelation! There is no God!”

For most people today who consider themselves to be ‘modern’, the maxim of religious tolerance has become a pillar of the creed (although this is changing very rapidly). The separation between church and state has been a concept that people in Western ‘secular’ nations have taken for granted so much so that many cannot imagine ‘religion’ in any form as being the driver of any society. The transformation and maintenance of Hagia Sofia into a museum was a visible symbol of the modernising Turkish state initiated by Ataturk. The fact that Hagia Sophia is now again a mosque speaks volumes about where Turkey is headed, and this should concern all those who claim to believe in ‘Western values’.

Now I will turn to addressing the Christians in the audience. In some ways our causes for concern over the re-dedication of Hagia Sophia are no different from that of a secularist. However, I believe we have far deeper reasons for concern, sadness and even mourning over this event and NOT because the building used to be a church.

In asking the question of why does Hagia Sophia matter one is essentially asking why does the Byzantine Empire and its history matter? For me the answer is summed up as this; Christ has been building his Church since Pentecost.

Today if you were to speak to an average Christian in the West and ask them about a figure from Church History, such as St Athanasius, you’d at worst get a look that would make it seem like you’d dropped out of another planet and at best a comment that the creed with his name on it is too long. There is also a nasty habit amongst certain Protestants to think that everything that happened in the church after Constantine the Great up till the Reformation was essentially corrupt Roman Catholicism.

This is snobbery that just boggles the mind. Simply because Christians for many centuries in history did not look like, practice or think like a living Western Christian does not mean that they either did not have or “lost” the gospel. If we take this perspective then we practically deny that God has worked at all in history outside the Old and New Testaments.

The Byzantine Empire was a profoundly Christian empire. One cannot escape that fact. It was significant in bringing many nations to Christ, evangelising them and establishing churches. The Russians, Bulgars, Serbs, etc. were Christianised by Byzantium. The empire also served as the main bulwark of Christendom against Islam for hundreds of years after the Arab Conquests of the 7th Century A.D. until the fall of Constantinople in 1453 A.D. Many of the arguments used by Byzantine theologians against Muslims are still the same today. Byzantium also gave to Christians major theological developments, such as Two-Natures Christology, that are fundamental to a right understanding of the Christian faith.

Hagia Sophia should not be seen as merely a building that is now a mosque. Rather it should be viewed holistically in light of its history. For the secularist its reconversion is a physical reminder of the peril that secularism and secularists find themselves in with the march of the various Caliphates in the Middle East. For the Christian it should act as a reminder of what the Triune God has done in history, how he has blessed and shepherded his people even in the midst of disaster - and above all that Christ is the victor.

If anyone has had their interest sparked in Byzantine history after reading this I can recommend an easy summary is ‘A Short History of Byzantium’ by John Julius Norwich.