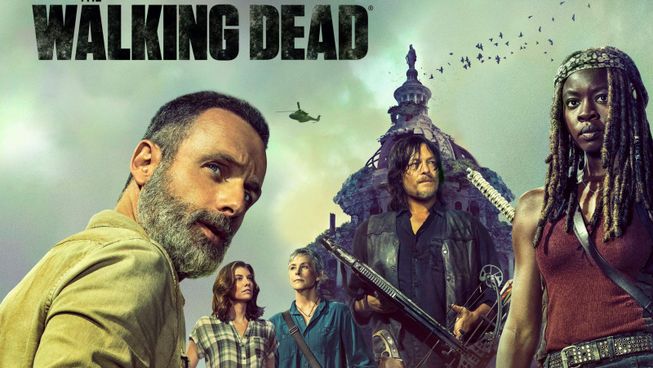 The Walking Dead, Z Nation, In The Flesh, iZombie, V-Wars

Streaming services such as Netflix and HBO have been bulging with series about pandemics of the Zombie and Vampire kind for several years now.

You know how it works. A virus or mutation enters the population somewhere remote in the developing world. Thanks to modern conveniences such as air travel it alights in a US or European airport, ready to skip duty free and head straight to the city streets to party.

Result? Immediate and catastrophic societal breakdown, with the unaffected humans first becoming the hunted, before becoming the hunters of each other in increasingly violent ways as they seek to survive by any means possible.

We binge watch, follow our band of heroes on their journey, marvelling at how well fed they manage to look post-supermarket food, and how their teeth remain so white and pain-free despite the lack of modern dentistry after a year or two on the road.

Those zombies might get uglier and uglier but the humans they’re hunting look just one level of dishevelled below a Hollywood A-Lister slouching to a downtown Starbucks on a Sunday morning.

Why the huge surge in popularity of such series? Partly because we all love a good and ghoulish zombie or vampire, and streaming services are pumping out content that people want to watch. If we didn’t watch it they wouldn’t make it. It’s a mainline drug. Or fresh blood. Finish on series and you want more. Insatiable as vampires, we are!

In light of the concern around the coronavirus that is moving around the world at the moment, these series are tapping into primal concerns that we have about our collective future. If the various medieval plagues were able to wipe out vast swathes of Europe back before modern transport, what could happen today?

Are we merely one week away from complete societal collapse? Or is a week giving us too much credit? Are we more like the Springfield townsfolk in The Simpsons, who within two minutes of the power grid going down are trashing cars and looting?

Given how interconnected everything is in our lives - an interconnectedness established by, and then eulogised by, big tech, what if an actual virus went actually viral all of a sudden? We’re so used to the term referring to the spread of information on the internet that we’ve lost the sting of its original meaning.

People are feeling nervous. They look at the fragility of their lives. They look at their deep dependence on modern technologies and economic systems that provide their food, their social care and their health, and they wonder how they would cope without it. They’ve been trained into deep domestication.

Or should I say we have. I have. How would I cope with sudden societal collapse? How would I keep my family safe? I have zero nunchuck skills and would struggle with plunging a machete into a coconut never mind a zombie’s head. Most of us in the West are soft, and deep down we know it, regardless of how many burpees we can do at Cross-fit.

There’s a great meme that captures our misplaced sense of confidence. Two identical pictures of zombies surround a car with our hero atop top of the vehicle fighting them off. Picture one has a red pen circle drawn around the survivor, with the words “Who I think I am in a zombie apocalypse.” Picture two, a red circle around a zombie three rows back with the words “Who I actually am.”

So too with the coronavirus. If the news headlines are any indication we feel helpless. What could we do even if we wanted to, if this thing took off? And could we trust the government? In zombie series the government is either inept or it is the problem.

And in reality too. We read reports about how news of this latest virus was suppressed by the Chinese government, even while we marvel at the speed at which the Chinese built hospitals to deal with it. Ten days to build a hospital? Fine. But what could a virus do unchecked in ten days across the globe? We don’t like to think about these things.

Central to our unease is the reality that we are fragile, as nations and as people. The fragile nature of our national peace is highlighted by the wars and turmoil that spring up in places that previously seemed so safe.

The city Sarajevo in the former Yugoslavia was best known as the host of the 1984 Winter Olympics. The whole world was watching humans excel at sport.

That is until less than a decade later, when the whole world watched in horror, as the city became the scene of an Olympian ethnic struggle.

Sarajevo has became a byword for horror. A bloody long-term siege, as Yugoslavia tore itself apart in a brutal civil war, led rampant death and destruction. The body count would have done any zombie series proud.

And individually? We’re fragile beyond belief. Or at least beyond what we want to admit. There’s a wise observation in a short letter in the Bible by a man called James, who observes:

Why, you do not even know what will happen tomorrow. What is your life? You are a mist that appears for a little while and then vanishes. (James 4:14, New International Version).

For many of us that’s just too much reality to handle.

What? I do know what will happen tomorrow. Why? My Google calendar tells me so. What is my life? Whatever I want it to be! A mist? I’m not a mist! I’m a tsunami, sweeping all before it! See my awesomeness!

But in the quiet moments, away from the blue screens, we know that that is not true. Our graves will mostly remain unvisited. We appear, “for a little while”, then vanish.

And it’s that “for a little while” that we are so anxious about. Do I matter? Will I leave a legacy? Will I find meaning in the midst of the fragility of it all? The headline news, such as this coronavirus, taps into the personal as much as it does the global.

The message of the Bible is that humans, under God’s good care, are not merely doomed to vanish forever, nor indeed just to survive, but to thrive. The creation is announced as “very good” by God in the book of Genesis, not just because there’s a frozen yoghurt outlet on every street corner, but because it’s able to fulfil all that God intended it to fulfil.

The Bible story continues by telling us that humans rejected God and His good intentions for the creation, and in doing so became the truly “living dead”, infected by the most fatal virus of all - sin/rebellion against God.

The umbilical cord between God - the author of life - and us, was cut, and we stumbled out on our own, often well-heeled, well-educated, well-dressed and with first rate dentistry work, but zombies nonetheless.

Is there a cure for this virus? A way back from Z Nation? The Bible says there is, and it’s a message of hope. Hope not just beyond this uncertain world, and all of its potentially fatal viruses, but of hope for and in this world, and for those for whom it was made - humans created in God’s image.

We want to matter for more than “a little while”. We want to survive the zombie virus and the coronavirus and, most of all, that pesky little virus called death. We want to thrive!

Keep exploring the Third Space website, there’s plenty of material there that show you what true thriving looks like.