Why Hyper-Individualism fails to help us grow

Why Hyper-Individualism fails to help us grow 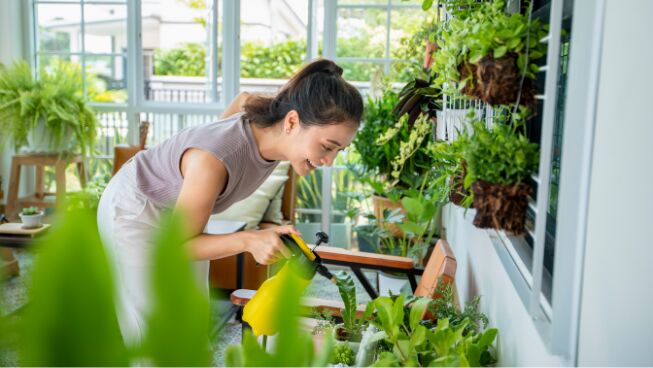 On Monday morning I decided that I would take to all of our indoor plants with weed killer.

Actually I didn’t decide that. I decided to feed all of the plants with liquid fertilizer, but inadvertently took the wrong bottle out of the cupboard and gave them all a liberal dose of glyphosate, a broad-spectrum herbicide. What does broad-spectrum herbicide mean? Simply that it will kill everything, including my – our – indoor plants.

As soon as I realised what I’d done, two feelings emerged: shock and self loathing. Followed by panic. My first considered response was to lie about it, or at least say nothing, and then in four days’ time, when the plants started to wilt, feign surprise and annoyance to my wife. My second considered response was to determine how to enter the witness relocation program and move to Argentina under an assumed name.

My actual response was to ‘fess up, take the tears and anger (mine and hers), and then get on with trying to salvage things. That involved a quick trip to Bunnings to buy ten bags of premium potting mix, before removing the soil from every plant, washing out all of the pots and trays, and repotting them all.

And then waiting. I had thought about simply over-watering the plants – itself an idea fraught with danger – but glyphosate is residual, it lingers in the soil for up to 12 months, slowly withering the plant over time, even in small doses.

Four days in, I am cautiously optimistic that I caught it in time, but I have my new fake passport and burner phone on standby just in case.

It’s kinda funny that what I thought was my effort to ensure that my indoor plants flourished, was actually going to kill them. What a mistake to make. It was the very opposite effect of what I wanted to do! My good intentions were misguided intentions. And if I had never discovered on Monday that there was a problem, I would have certainly discovered it by now.

You know, I reckon that in Western society there’s a form of social glyphosate that we’re mistakenly pouring into our cultural ecosystem. And it’s this: We are under the well-meaning assumption that the path to flourishing in our modern society is to encourage what is called “radical expressive individualism”.

That term sounds as complicated as the ingredients list on the back of a bottle of RoundUp, but what it means is this: The stated goal in our society is to ensure that everyone can be who they wish to be, no strings attached, or as few strings as possible. Relationships of obligation are replaced by relationships of choice. We chop and change and rearrange life to try to find the perfect blend. And it’s almost working. Almost.

At the foundation of this idea is that we come into the world as an individual who is designed to establish their own identity and create their own meaning in life, and that no restrictions (unless otherwise prescribed) should be placed upon them. Any restrictions on my full liberty to be me are oppressive and should be named and shamed.

Another way of putting it is “You Do You”. Or perhaps as any Disney movie might say: “Follow your heart!”. And here’s the thing: We think that if we feed this idea into the soil of our culture that somehow it will lead to everyone flourishing.

Here’s the problem. It isn’t leading to flourishing. It’s leading to a withered society. It’s a social and spiritual form of glyphosate that we mistakenly believe is helping us grow better.

Psychology practices are booked out. Self-medication abounds. Radical expressive individualism - us getting to decide who we want to be, and how we want to be it outside the confines of others - is not resulting in the flourishing that is promised on the spray bottle.

And it’s residual. That anxiety is filtering down into the very root system of our culture. What was supposed to be the Age of Authenticity has become the Age of Anxiety, as we all struggle to achieve what seems to be the increasingly impossible goal of self-actualising.

Melbourne author and pastor, Mark Sayers, puts it like this:

"In our day, anxiety has become one of the significant ailments of our world. Yet it is also a signal, an alarm that something is desperately wrong in our world."

In other words, trying to simply flush it out, either medically or masking it with “feel good” distractions, won’t in the end alleviate the problem, because anxiety has become residual in the subsoil of our culture. The toxins remain, no matter the masking agents we pour on.

What solutions can we see? Where, if at all, is there a way forward? Sayers, in line with the thinking of many other spiritual leaders, observes that some root and branch work is needed – a potting mix change if you will – is required to resolve this. And it won’t be easy. It will take time, and the results might not be seen for a while.

Sayers says that there is a way to live that is non-anxious and that we can actually become people who flourish in the midst of a fading culture, and who offer a way forward. And one of the keys is that we put to one side the “You Do You” framework. That we start to see ourselves less as autonomous individuals carving out our own pathway towards flourishing, and we seek to embed ourselves in the healthy soil of a community centred around something more than ourselves.

And there’s a deeply spiritual aspect to that. Which is almost counter-intuitive in our seemingly secular time, in which the idea of spirituality is also reduced to private experience. What if a group of people gathered around a project that is not all about themselves is actually the path to true flourishing.

And what if, at the centre of that community, there was someone known as a “non-anxious presence”; someone who took on board the anxieties of others and renewed them in a radical way, much more radical than my ten bags of potting mix?

The book of Jeremiah in the Bible, written in an extremely anxious age of societal change and warfare, says this:

“Blessed is the person who trusts in the Lord,
He is like a tree planted by water,
that sends out its roots by the stream,
and does not fear when heat comes,
for its leaves remain green,
and is not anxious in the year of drought,
for it does not cease to bear fruit.”

Jesus Christ said to bring our anxieties, our weariness and burdens to him, and that he would give us the rest we needed. He would enable us to flourish, not by us becoming increasingly independent, but by finding our dependence in him, the truly non-anxious one. Jesus is the one who will truly make us flourish, even in an Age of Anxiety, by first removing the spiritual glyphosate that is destroying us, and then by renewing us at a radical level, putting us into good soil, before watching us grow.