So Science and Religion can mix? | Third Space
Loading...

So Science and Religion can mix?

So Science and Religion can mix? 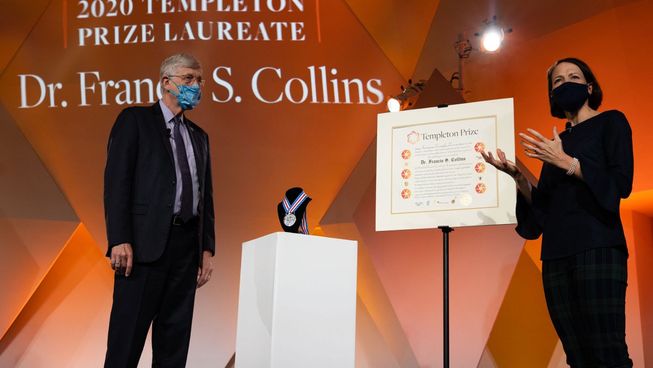 The evidence is in: In an age when the average scientific atheist such as Richard Dawkins claims that religion and science can’t mix has held sway, the data suggests otherwise.

The latest proof is the awarding of the Templeton Prize to an evangelical Christian, Francis Collins from the United States.

If you’re not familiar with the Templeton Prize, it was the brainchild of philanthropist, Sir John Templeton, and is now awarded annually to a recipient who has proven adept at:

“harnessing the power of the sciences to explore the deepest questions of the universe and humankind’s place and purpose within it.”

Not that a religious person necessarily receives the award, but many who do are religious people. And Collins is not merely “religious”, he holds to an orthodox Christian conversion experience having grown up an atheist.

True to form, Collins entitled his acceptance speech this year In Praise of Harmony.

In it he states:

Beginning with the reason that I am here tonight, let me say something about the perceived disharmony between science and faith. Nearly six in ten adults in the US say science and religion frequently conflict. That was certainly my view as I was growing up in Virginia, without much of a spiritual perspective, but falling in love with the scientific method.

Yet of his conversion he says:

But then I moved from quantum mechanics to medical school, and the questions of the meaning of life, and the reality of mortality, were impossible to ignore. Science didn’t help me much here. But I was surrounded by patients, and some of my professors, for whom faith provided a way to wrestle with those profound questions. That was puzzling. Challenged by one of my patients to describe what I believed about God, I realized my atheism was dangerously thin.

So aside from his important roles in the public square, he has a concern to live and act in such a way that observations about life and meaning for life are complementary tasks.

Collins describes his conversion a little like the famed Oxford scholar and Narnia series author, CS Lewis, describes his, in which his objections gradually fell away over time, not merely on the basis of how he felt (his emotions), but on the basis of what he discovered (the facts) about Christianity.

Collins is a formidable force in the field of global science. Appointed by President Obama as the director of the National Institutes of Health, he is one of the world’s most recognised physicians and scientists.

While his current role is currently most newsworthy, (he oversees the US federal government’s biomedical and health responses to COVID-19), his previous work as the director of the Human Genome Project is his standout long term achievement. It was a project he oversaw to completion.

Beginning in 1990, the project’s goal was to sequence and identify all of the base pairs in the human genetic instruction set, finding the genetic roots of disease and then developing treatments.

Given the complexities around what was described as a “megaproject”, side projects in the areas of sociological, legal and ethical implications were constantly undertaken.

In his address Collins highlighted - and lamented - the overall lack of harmony in our world, in which deep philosophical tribalism in the West is starting to fracture us.

He lists three responses that can address this, first, a renewed commitment to truth and reason. Of this he says:

Of all the developments that cause me concern over the past few years, none is greater than the growing disregard of maintaining a high standard of objective truth. We have no future as a society if we abandon that framework.

Second, he highlights the urgent need to address the growing spiritual void in our culture:

... there are many … consequences of our spiritual impoverishment short of death. We need to be re-anchored in those ancient spiritual truths that provide a rock upon which we can build our future. Go back to the Beatitudes from the Sermon on the Mount to see what blessings apply to the kind of life that God had planned for us.

And third, and the one he considers most important, a return to our calling to love one another:

Love is stronger than hate. You cannot pray regularly for someone and continue to despise them. One of my favorite verses about love comes from Colossians 3:12: “Therefore, as God’s chosen people, holy and dearly loved, clothe yourselves with compassion, kindness, humility, gentleness, and patience. Bear with each other and forgive whatever grievances you may have against one another. Forgive as the Lord forgave you. And over all these virtues put on love, which binds them all together in perfect unity.” Can you imagine what would happen to our fractured society if we all tried to live out this exhortation?

You can read the full text of his speech here, and it’s certainly what you would expect from someone of Collins’ calibre; intelligent, robust and deeply concerned about the public good.

There’s a great video too from Barack Obama, congratulating and praising Collins for the award and encouraging others to follow his example.

Perhaps you’re someone tarred more with the scientific atheist. Perhaps you’ve read The God Delusion by Richard Dawkins. If so, and it’s convincing to you, then perhaps let me suggest that you also read Collins’ best seller, The Language of God. It may not convince you, but as all scientifically minded people know, the science on anything is never settled. Exploration about new possibilities is, after all, the launch pad of many a scientific journey to discuss truth. There’s nothing to be scared of in exploring the writings of those who opinions you don’t hold. After all, that’s how Collins himself works, as he mentioned in this New York Times interview:

Considering my own stance on the satisfying harmony of science and faith, you might be surprised to find on my shelves nearly everything written by Richard Dawkins (including “The God Delusion”) and my late friend Christopher Hitchens (including “God Is Not Great”). One must dig deeply into opposing points of view in order to know whether your own position remains defensible. Iron sharpens iron.

I like that last line: Iron sharpens iron. It’s actually a biblical quote, but it is something worth holding onto in this world of increasingly polarised opinions, in which we only ever listen to “our side” and increasingly cancel anyone whose views we don’t hold. As happened, ironically, just last month to Dawkins himself, though not, I hasten to add, from a religious group, but from a secular university.

Dawkins could do worse than phoning Collins to congratulate him. I’m pretty sure Collins would pick up the call.