What are friends for?

What are friends for? 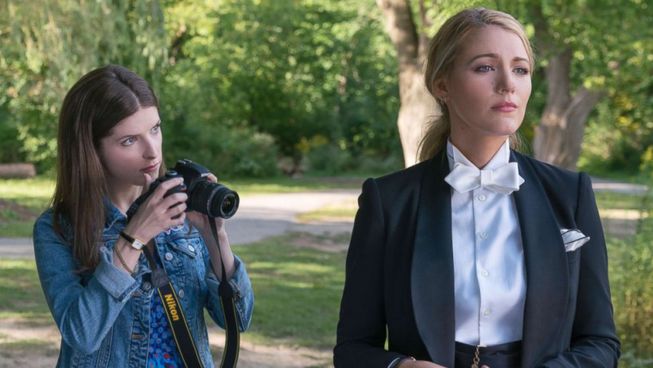 Since leaving moving from a successful career in television production to directing feature-length films, Paul Feig has managed to define his career by gravitating toward scripts with strong female leads in comedic roles. From Bridesmaids to Ghostbusters, he has proven to be a champion of empowered women which manifested itself publicly with the varied response to the reboot of the 80’s classic. Despite having two strong leads in A Simple Favour, Feig moves into new territory with a dramatic mystery that centres on the depth of friendship.

Stephanie Smothers (Anna Kendrick) is a single mum who tries to mask her grief and loneliness by investing in the life of her son, Max (Joshua Satine) and reaching out to the online community with her weekly parenting vlog. After helping with another school event, she manages to meet Emily (Blake Lively), the mother of Max’s best friend, who invites the Smothers over for a play date. While the boys play, the mothers get to know one another over martinis.

Despite their divergent lifestyles and outlooks on life, the two begin to build an unexpected friendship. As they learn more of one another and get involved in one another’s lives, Emily asks Stephanie for the simple favour of watching her son, Nicky (Ian Ho) while her husband, Sean (Henry Golding), cares for his sick mother in London and the businesswoman is stuck in an unexpected meeting. What was supposed to be an afternoon play date, turns into multiple days of care while Steph comes to the realisation of Emily’s disappearance. The stay-at-home mum has to work with Sean and law enforcement to piece together the mysterious vanishing of her friend. As she begins to unearth different clues and blogs about the case to her online followers, things become exceedingly unexpectedly sinister and lead to twists that will leave both families irrevocably changed.

The ebb and flow of Darcey Bell’s novel is reminiscent of Gone Girl, but focusses on female comradery and proves that moral depravity is alive and well in the supposed innocence of the suburbs. Instead of the dark canvas used in David Fincher’s classic mystery, Paul Feig chooses a lighter and whimsical entry point for this twisted tale by capitalising on the beauty and strength of his lead characters. The virtuous setting, stunning wardrobes and outstanding soundtrack will quickly draw audiences into this story of friendship and set them up to experience the same level of betrayal as the women in the film.

Reminiscent of the sirens of the Odyssey, the exterior allure of this story may draw audiences in, but the charm masks a vicious story of moral ambiguity that goes beyond believability and good taste. Kendrick and Lively are perfect in their multi-layered roles, but for every positive quality they provide their characters things prove impossible to escape the unappealing direction these women take.

At the risk of giving away key plot points and twists, it is best to say that a film that presents as a good choice for a ladies night out is the antithesis of a friendship bonding experience. From the inclusion of Lively’s full-frontal portrait as a key plot point to murder, incest, adultery, and arson as critical elements from the story’s progression, every endearing character or humorous anecdote is spoiled by a distasteful counterbalance.

Even though Feig does all he can to empower women through his films, A Simple Favour merely proves that ladies can be as morally abhorrent in their choices and despite their beauty, they can hide an unpalatable personality. Which leaves this reviewer to fulfil the role of Circe of The Odyssey, who helped his fellow travellers from getting too close to the danger of the Sirens. Even with the beauty on offer and despite the beautiful soundtrack, steer clear of this unsavoury tale of despair.

Loyalty is both fascinating and confusing. It is defined as being faithful to something on someone. People will put their money, careers and lives on the line for the sake of loyalty to family, friends or countries. In A Simple Favour, the characters base most of their decisions on misguided acts of friendship. It begs the question, why do we choose to be loyal or faithful to someone else?

It seems to be rooted in wanting to place an implicit trust in the person we put our faith in and knowing that this loyalty will be reciprocated. The Bible plies a deeper meaning to the idea of loyalty. In the study of these words and evaluating human history, God is the only one that is completely faithful. He is faithful even when his followers are faithless. On the subject of loyalty, mankind's faithfulness can be fleeting, but with God we can find real loyalty and someone who is true to their word.