Religion Without God: Bible Without Jesus

Religion Without God: Bible Without Jesus 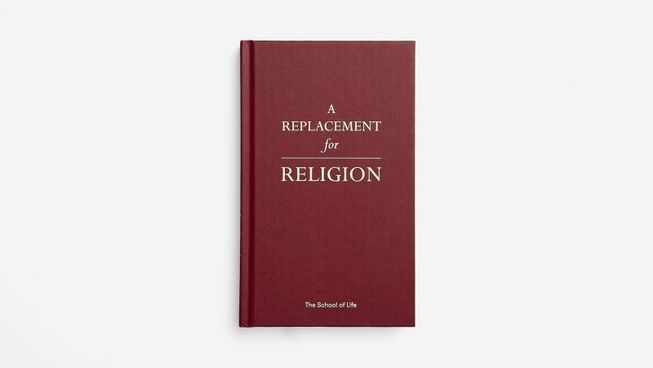 Can you have religion without God? How about a Bible without Jesus? Because that’s what’s on offer from secular organisation The School of Life, co-run by famed British philosopher Alain de Botton.

“A Replacement For Religion”, is a set of books that look like, well, that look like the Bible. The advertising says the series is full of wisdom and lessons for those who need something that does what religion does, but without the religious bit.

A Replacement for Religion lays out how we might absorb the best lessons of religion, update them for our times and incorporate them into our daily lives: it tries to rescue some of what seems wise and useful from that which (for many of us) no longer seems quite true.

It’s funny, but there was a time when we were told we could have a completely religionless society. And that that would be a good thing. A glorious day would arrive when the last rusty bits of the old religions fell off our world for good. Or so we were told. We were also told that what we’d find underneath would be a bright, shiny new world that didn’t need the old divisive dogmas that religion brought. Can you remember being told that? Perhaps you’ve told it to others.

But what are we getting? We’re getting a world that is bright and shiny: Bright, shiny and cold. No one told us that “cold” bit - no one we listened to anyway. As religion has fallen away in our secular culture, it’s becoming clear to many people that the meagre secular replacement doesn’t hold a votive candle to it. Fewer and fewer people go to church, temple mosque or synagogue. More and more people are in therapy dealing with deep anxiety and loneliness.

By all accounts people need the community that religion brings. People have given up the rituals of religion, but find the ritual of reaching for their smartphones first thing in the morning a less than satisfying replacement. And the deep solemnity that religion can bring to life is being replaced by a shallow triteness, at the very time things in our world are becoming more complex.

So it’s no surprise that The School of Life is trying “to rescue some of what seems wise and useful”. That’s a noble aim from a noble group led by someone I admire in Alain de Botton.

Now there was a time not long ago, when New Atheists such as Richard Dawkins held sway, when none of this religious stuff seemed wise and useful, so we got busy junking it. It was just like that time I let my parents-in-law get rid of a stunning mid-century modern wooden sideboard, instead of taking it off their hands. My wife and I gaze wistfully at its equivalent in secondhand shops, and gulp at the four figure price tag. Why did we let it go?

Here’s why. We thought it was past its use-by-date. Just like lots of people thought religion was. And now they’re busy putting together books that try to replace some of the great cultural furniture that they’d put on the junk heap, because they realise how valuable it is. Well, The School of Life’s book ads have that wistful tone to it, just like my wife and I looking in the shop window at stuff we once could have had for free, but now have to pay an arm and a leg for. The website goes on:

Many of us find ourselves in the odd situation of not believing in religion, but nevertheless being interested in it, moved by it and sympathetic to some of its aims. We may enjoy religious art and architecture, music and community, and even some of the rituals - while being unable to believe in the divine. This book is about those feelings and what we might do about them.

A book of feelings. A book that wants to shape your emotions. Just like the divine love story of the Bible. Yet not the Bible. Not something that claims any belief in the divine. And that is, I think, where the problem lies. Because without the divine, you can’t have the love story.

A Replacement for Religion says it wants “to rescue some of what remains wise and useful”. The Bible, on the other hand, says that God has done the rescuing act for us in Jesus. The power of the Bible’s teachings is not that we can learn the lessons, but that we can’t and won’t. We’re stuck in a lifelong Mobius Strip, looping back in on ourselves, relating the same patterns and mistakes. We need rescuing, not the teachings of our religion.

Here’s what The School of Life’s advertising says about art:

We tend not to take ideas in properly unless they have first been presented to us in an emotionally appealing and seductive way. It is not enough for an idea to be true; if it to stick in our minds, it will have to be rendered sensuously tempting as well.

Without any irony, in an adverting pitch that includes an introductory chapter on “The death of God” the website highlights this photo below of the crucified Jesus and his grief-stricken family and friends.

If there is a God who has gone out of his way to be so sensuously tempting of us, that He would give his own Son for the sake of our lives, then nothing else comes close. Anything else is just a shadow of that emotionally appealing and seductive act.

Is there merit in these books? In this website? Of course there is. All wisdom is good wisdom. But why start there? Why go to the reflection of reality, when reality itself is available? Why start at what can only be a pale shadow, an imitation, a play on seduction that leaves you feeling less than fulfilled? Perhaps as Christmas approaches you’re looking around thinking “Is this all there is?” Perhaps you’re tempted to go buy a set of A Replacement for Religion books for a friend, a family member, or even for yourself.

At the moment in your life, with all its busyness, emails, social media click-bait, fake news and Monday rush hour traffic, the actual Bible, actual religion might, as The School of Life suggests “no longer seem quite true”. But what if it is quite true? What if it is?