What is the definition of sacrifice?

What is the definition of sacrifice? 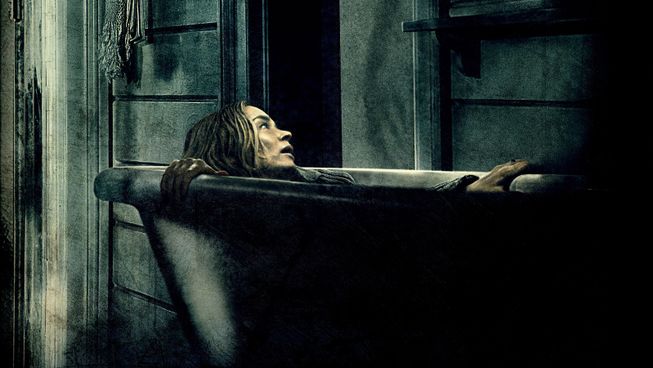 ‘The best horror movies keep playing even if you shut your eyes – they beat on the backs of your eyelids, like ideas that can't be shut away.’ - Tom Shone; The Guardian

Horror films have been around since the inception of cinema. Creative use of light, makeup and jump scares continue to light up screens around the world in a multitude of languages, because terror is universal. Even though not everyone enjoys being entertained by being scared out of their socks, every once in awhile a horror film manages to draw all audiences to the theatre. From Dracula to Psycho to Get Out, certain filmmakers manage to find that sweet spot that peaks the interest of viewers from all backgrounds. This can be said of A Quiet Place, an unexpected gem within the realm of fear.

Directed, written and starring John Krasinski (13 Hours) alongside his real-life spouse, Emily Blunt (The Girl on the Train) who portray the on-screen couple, the Abbotts. Along with their three children, they live a life without making any noise because of a recent alien invasion. The invading, ravenous creatures are blind, but hunt via their auditory senses and have managed to devastate the world’s population. Being some of the final surviving humans, the small family unit have to figure out how to survive in a world of no sound and without any certainty of living until the next day.

What takes this from the run-of-the-mill (or is that run from the mill) horror film is the ingenious use of sound or the exclusion of it. As Hitchcock made use of light and camera angles to manipulate emotions and fears, Krasinski taps into the impact of the auditory senses. By eliminating an essential component that most film fans take for granted means that it does not take long for the audience to feel the tension of the on-screen family and the struggle they endure. Even to portray what each cast member experiences of what they can hear, because one of the characters is deaf, shows a brilliance and an attention to detail that raises the bar on horror. Not that it is a silent film, but it means every noise, creak, and cry has significance and drives the story to a new level of terror.

The concept and direction are creative and groundbreaking, but the element that makes this film stand out is the depiction of humanity pushed to its limits, specifically their grief, sacrifice and the value of family. Unlike most movies within the horror genre, this will move people to experience emotions that go beyond mere panic and fear. The screenplay manages to convey the love of a family and what they are willing to go through for the sake of their survival. To touch on grief and remorse in such a real manner provides a heartfelt aspect of the experience of this family as it goes through this surreal ordeal together.

“And he arose and came to his father. But while he was still a long way off, his father saw him and felt compassion, and ran and embraced him and kissed him.” Luke 15:20

John Krasinski manages to bring one of the most well-rounded depictions of the struggles of fatherhood to screens in recent memory. Showing the undeniable love he has for his family that is coupled with a bittersweetness of dealing with grief, loss and survival that is both primal and beautiful. Reminiscent of the unconditional love we see in the story of the prodigal son and other parables of Jesus. This film depicts the layers of love that are experienced and shown by many fathers. Despite your opinion of this genre, this aspect of the film should encourage men to see this film to see a rich depiction of the sacrificial love of a father and a husband.

Not that this film does not have faults and plot holes, but most can be excused by the excellence in direction and the strong performances of the cast. A Quiet Place may not be at the top of everyone’s ‘must see’ list for the season, but this is a movie worth getting out to see. The unique experience of this film does include more than its fair share of jump scares, but beyond these bits of fright it may even invoke an insatiable desire to head home and hug the family or at least to learn how to live off the land.

The story of a father's love for his family: The prodigal son