The King above the King

The porous world above the material

The King above the King

The porous world above the material 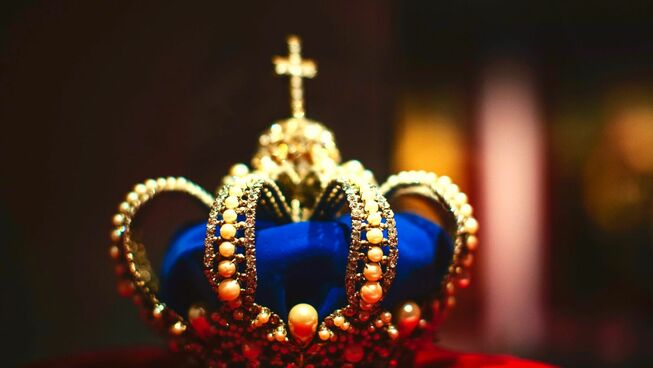 And it wasn’t King Charles either.

The monarch most mentioned was God and Jesus Christ. The term “Christ” is not Jesus’ surname. It’s his title. “Christ” is the Greek equivalent of the Hebrew word we call “Messiah”. Both mean “anointed one”, in recognition that the king in the Bible was anointed with oil.

In fact when the Queen was crowned way back in 1952 she was anointed with oil during what was a very religious part of the ceremony and so will her successor King Charles be too.

The Queen’s funeral was above all, a very religious funeral. There were lots of readings and songs and It was a recognition that there is an invisible monarch above the visible crown. It recognised that any power a monarch possesses has ultimately been given them by a higher power.

And at a time when many people in Britain no longer attend church or even believe that the God of the Bible actually exists, it was a reminder that perhaps there’s more to the world than what the eye can see.

Perhaps there’s more than the day-to-day life of commuting, whitegoods, holidays and social media. Perhaps there’s a spiritual side to life that is invisible to us. And perhaps it’s something that we both desire, but can’t possibly fathom at the same time.

That feeling that the Queen represented something invisible was clinging to the cool September air in London during her funeral. I think we felt it through the TV cameras too! Many of us felt that, maybe for one last time, there was a public acknowledgement of an invisible world that was as real as the visible world.

I don’t want to say that everyone who was watching or attending felt that, but it was at least a factor for many. The world is, as we might put it, “porous”. And that’s in direct contrast to the public world of politics, law, sport and finance which pretty much assumes that we live in a hermetically sealed bubble. All that there is is all that we can see, there’s no heaven above us and no hell below.

It’s interesting, isn’t it, that during the Tokyo Olympics last year the song at the opening ceremony, which was supposed to bring the world together, was Imagine, by John Lennon. It speaks of a desire for nothing more and nothing less than what we can see here and now. And that’s pitched to us as something desirable.

Yet stubbornly the idea of something more, something invisible, a hint that our world can “leak” into the invisible world, and it into us, clings on.

Well it clings on in the West. That whole idea of the world being porous has never left the social imagination of so much of the world still. And even many in the West who don’t acknowledge any particular faith seem mesmerised by the idea, even if they can’t bring themselves to believe it is so.

If we don’t believe that, then just look at the number of movies in recent years that deal with other realms or universes. Perhaps the science and the maths scorns these things, but the stories we tell ourselves say something else.

The Queen constantly acknowledged not only that she believed that Jesus Christ lived, but that he died and rose again too. In some senses she’s the last monarch that reigned during a time when that idea was taken for granted in Britain, whether people believed it or not. King Charles will not inherit the same king of country. Perhaps the lowering of the Queen’s coffin into the vault at Windsor was the final closing of that door in the public’s imagination.

Or perhaps not. Maybe the tide has gone out, only to return again at some later point. One of the myths – or convincing stories – of our modern age is that as people get more modern they get more suspicious of anything spiritual or invisible, or “porous”.

But this is clearly not the case. Francis Collins was the head of the Human Genome Project in the USA, and the former director of the National Institute of Health in the USA. His work involves some of the most complex science, and most astonishing discoveries, in decades of research. Yet he unashamedly is a Christian who believes the same stuff that the Queen believed about Jesus.

In the end it won’t simply be the desire for facts that causes the tide to rush back in, it will be the desire for meaning. There’s a huge meaning and purpose gap in our modern West, that no amount of anything seems to fill. Our huge waiting lists of anxious people seeking an appointment with overbooked counsellors and psychologists reveals this.

Of course that doesn’t mean that meaning and purpose don’t have anything to do with facts. The Christian message says that facts matter. Jesus either rose from the dead or he didn’t. If he didn’t then there’s no point to Christianity. That Christianity in its infancy, when proof or otherwise was publicly available, went hard on the facts, shows that it won’t be relegated to the realm of opinion.

And that’s what the Queen believed. She also believed that just as she will be buried, she will rise again. Because that’s what she believed about Jesus too!

And maybe you don’t. And that’s alright. But at least you’d want to explore whether your confidence that the only reality that exists is what we can see right here and right now, is actually a misplaced confidence.

The British monarchy never purported to be the destination of a visible reality, but a signpost to a greater, invisible one. It was designed to call attention to the limits of human rule, as well as the porous presence of an even greater King who rules and reigns from an even greater throne.

The British national anthem is itself a prayer to that throne, for only God - the true King – can actually save the king. And that’s the great leveller, because only God can save you also.