Has the Universe Outgrown God?

Has the Universe Outgrown God? 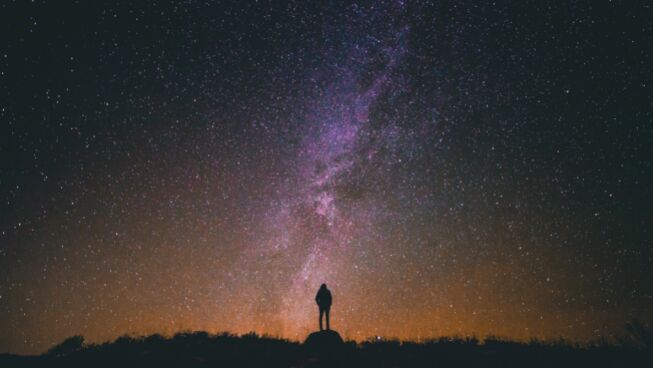 Mind blown! The pictures coming from NASA’s James Webb telescope are incredible. The light seen in the photos sent back is from galaxies 13 Billion years ago, the longest back in time that we’ve been able to see. It’s a step up even from the Hubble telescope pictures that blew our minds when it first sent back pictures from space.

With every technological increase here on earth, we’re getting more chances to go further back in time. Light takes millions of years to travel across the vast distances to the telescope, which is currently one million miles from earth. It’s a simple equation: The more technology improves the “earlier” we can see.

Understandably, scientists and researchers are cock-a-hoop. This is brilliant. And it raises all sorts of questions about the size of universe, and its age. How big is it and when did it all begin?

NASA doesn’t mind flexing when it comes to explaining the er, cosmic, nature of what they have achieved, with the agency making this comment about the images:

"Thousands of galaxies – including the faintest objects ever observed in the infrared – have appeared in Webb’s view for the first time. This slice of the vast universe covers a patch of sky approximately the size of a grain of sand held at arm’s length by someone on the ground."

And you thought you were important!

The whole venture has, quite naturally, raised the bigger questions of how we might have all gotten here in the first place and if “we” and “here” are even categories we should use any longer.

And you can hear that in the comments made by one excited scientist, Dr. John Mather, Nobel Laureate and the James Webb Space Telescope Senior Project Scientist:

"The chemical elements of life were first produced in the first generation of stars after the Big Bang. We are here today because of them - and we want to better understand how that came to be! We have ideas, we have predictions, but we don't know… if we really want to know where our atoms came from, and how the little planet Earth came to be capable of supporting life, we need to measure what happened at the beginning."

Yet no one’s really just interested in the “what of life” questions are they? We all want some “why” to our “what”, after all. No one is in therapy discussing the vastness of the universe simply because of its size, but primarily because of the significance to them of this reality. If that is the case, do we matter? Do I matter?

The irony is that many will use the James Webb images to further cement their already hardened claims that such vastness shows that either God does not exist, or even if He did, why would he be interested in you.

It’s intriguing how the ancient Scriptures of Israel are able to hold these two things in tension in a way that we struggle to do. And there was a real sense, even then among those who wrote such texts, that the universe was vast. Hence we read in the song book of ancient Israel, the book of Psalms:

"The heavens declare the glory of God, and the sky above proclaims his handiwork. Day to day pours out speech, and night to night reveals knowledge. There is no speech, nor are there words, whose voice is not heard. Their voice goes out through all the earth, and their words to the end of the world." (Psalm 19:1-4).

There’s a very clear sense of the bigness of the sky – given what they could see with the naked eye. And they were more attuned to the night sky than we are, given the lack of light pollution they experienced. Imagine sitting out night after night around a shepherd’s camp fire just looking up.

These verses were radical for their time. The other ancient nations considered the heavenly objects to be gods, but for the Jews, these were created objects by the one true God. They were not there to worship, but to point to the Creator who is to be worshipped.

But note too that the night sky sings out the amazing creative ability of God. There’s a “why” question right there. The ancient Jews may not have worshipped the stars, but neither did they look at the stars and go “It’s too big and vast for there to be a God, or at least one who cares about us.”

The clue is in the next part of the song, which demonstrates that looking to the skies – whether as a shepherd 3000 years ago, or via a telescope a million miles away from earth – won’t give you the answer to the “why” question. The answer to that can’t be found by us, but rather it must be revealed to us. So the Psalm goes on:

“Law”, “testimony”, “precepts”, “commandment”: these are all ways of describing God’s revealed message to Israel: A real God who saved them from slavery in Egypt (read about that in the Old Testament book of Exodus). But also as a God who spoke to them in a voice they could hear. They had zero chance of coming to any conclusion about God from the speeches that the heavens were making, because as it says, there is no audible sound!

But an audible voice – God revealing himself to people - meant two things. First they would no longer be tempted to worship the creation like other nations did. But second, they could have meaning and purpose in life because there was an intelligent mind behind the formation of the universe.

It surprises me that of the many intelligent people who have created such amazing technologies, too few wonder if their own intelligence may simply be a shadow of a greater Intelligence. There’s too little sense that at the furthest reaches of what the telescope can see, there might be a God behind it all.

Here’s the thing: the Psalm starts with us looking up at God’s work, and ends with God looking down at our work. The last section says:

"Who can discern his errors? Declare me innocent from hidden faults. Keep back your servant also from presumptuous sins; let them not have dominion over me! Then I shall be blameless, and innocent of great transgression. Let the words of my mouth and the meditation of my heart be acceptable in your sight, O Lord, my rock and my redeemer. (Psalm 19:12-14)."

Far from thinking that the God who created such a vast universe would not be interested in little old me, this song says the exact opposite! God even knows the hidden, dark universe of my thoughts and my desires. The song asks for help to overcome the stuff inside us that no human telescope could ever see!

There’s something about this Psalm that’s even more exciting than the findings of the James Webb telescope: There’s a God of the vastness, who yet has such a deep interest in humans that He will not only reveal himself to a nation, but will personally come alongside an individual and get to know them personally.