Fast Food? Jesus would make a meal out of it | Third Space
Loading...

Fast Food? Jesus would make a meal out of it

On the hidden cost of McDonaldisation

Fast Food? Jesus would make a meal out of it

On the hidden cost of McDonaldisation 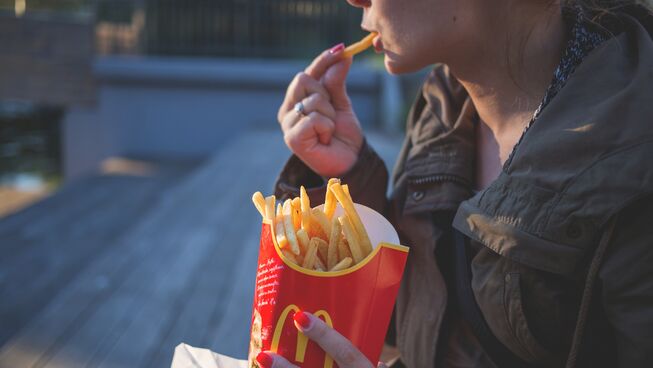 Fast food is guaranteed to do one thing – slow you down. Obesity and health rates track with fast food, though given that lower socio-economic communities across the West eat more of it, there’s probably more going on.

Actually fast food is also guaranteed to do at least one other thing: fill that pang of hunger you had as you were driving home from your training run/long day at the office/meeting that went on too long, FILL IN THE BLANK. The sweet taste of that juicy burger and the cheese hardening on the side of the packaging as we speak.

Oh it’s so quick and so easy and so, so, well, so fast! It goes down a treat. Cos it is a treat! I mean whoever jumped up in the air shouting “Oh goody!” when mum said “I was thinking of taking you all to McDonalds for burgers and fries and then I went ‘yeah-nah’ and made you my homecooked version of McDonalds instead. Look I even put the burgers in these tiny cardboard boxes!”

As comedian, and fast food tragic, Jim Gaffigan says, “not even close”.

It’s easy to razz on fast food. No one – within a certain cohort - admits to their friends that they eat McDonalds, but since the Golden Arches does a roaring trade, then plenty of those 'no ones' are eating it on the sly. Gaffigan says fast food – McDonalds in particular – has become something of a shibboleth in polite company. You’re in or you’re out depending on whether you partake.

Gaffigan partakes. He’s not proud, but he’s helpless in the face of the onslaught.

And onslaught it is in these days. In a prior time fast food was a treat, and most meals were homecooked. But now that it’s almost standard for two parents to work, and for meals to be no longer around the kitchen table, then fast food has become the go-to when life gets busy.

Which it is all of the time. So the amount of fast food we consume has gone up. As has the variety. Time was when it was McDonalds or Burger King (Hungry Jacks here in Australia), and not much else. And then here in Oz a thing called Red Rooster arrived, and it was a thing of beauty. It was exotic. They even sold baked bananas and deep fried pineapple.

As kids, mum and dad would take us down to sit on the grass embankment near the beach at the end of a searing hot February day and we’d eat a tropical pack from Red Rooster. And we’d imagine we were in the Bahamas, only the Bahamas were cooler and the beaches were less pristine than the Perth beaches.

Those were the days. The other days of course were mum’s standard bangers and mash, chips and steak and a variety of salad and vegetable matter. Launder, rinse repeat. Salad days? You can have them! We’d just hang out for those fast food days.

And maybe that’s the point. There was a point when fast-food moved from a luxury item to becoming a necessity. A necessity for the busy lives we lead.

There is a why to our eating that we don’t share with many other cultures through time and space. Once upon a time – and still in many places – who we ate with was a vital part of what we valued. The eating was less important than the socialization of the eating. Being excluded from eating with someone, or a group of someones, was a sign of a deeper exclusion.

In a biblical setting to eat with others was a sign of acceptance. Who is in. Who is out. To refuse to eat with someone who asked you was a snub. And then in the early church, a disciplinary move for those who had transgressed was to refuse to eat with them. It was a punishment, but a corrective one. We do the same thing when we tell a child to leave the table for being rude. Or do we even do that any longer?

Jesus was marked by his willingness to eat with those who were pretty much excluded from other tables. He ate, we are told, with tax collectors and “sinners” – the various assortments that no one else would eat with. Tax collectors could share food amongst themselves, but sinful birds of a feather should stick together. No one else was game to eat with them.

But Jesus did. And he probably wasn’t too fussy about what he ate. He even did some fast food eating himself one time, when he and his disciples were going through a grain field and ate of the grain on the run.

Here’s the thing – Jesus would eat with us. And Jesus would eat with those who ended up in McDonalds and were beyond the pale of the good crowd who wouldn’t darken its door. He wouldn’t be embarrassed if you walked up to him in the line and asked “Hey what are you doing here?” He’d be ok with that. After all he’d be okay to eat with you.

And while that’s true, there’s something about Jesus, and the relationship he wants with us, that’s beyond fast food. One of his great promises to a bunch of wayward followers of his in the Bible is this:

“Here I am! I stand at the door and knock. If anyone hears my voice and opens the door, I will come in and eat with that person, and they with me.” (Revelation 3:20).

There’s even a very famous painting of that by Holman Hunt. It’ a picture of Jesus standing at a door that’s covered up by the weeds and thorns of our myriad wayward decisions. And he’s knocking! Hardly time to put the kettle on never mind prepare food. Might have to call Uber Eats.

But here’s the thing: When it comes to offering grace, forgiveness and acceptance to people who open the door to him, Jesus is more than willing to make a meal out of it.