How an ugly ashtray reminds me of Christmas

How an ugly ashtray reminds me of Christmas 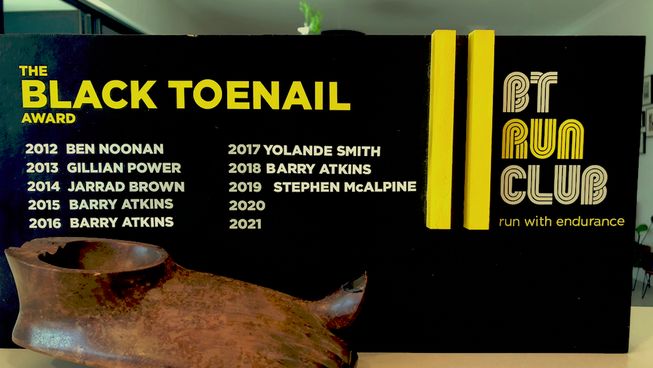 Every year my run club hands out a perpetual trophy called The Black Toenail Award. It’s for the club's best performer during the racing season, and throughout 2020 that trophy has sat proudly on my bookcase.

Why black toenail you ask? Because as every runner knows, the constant pounding of your toes into the front of your shoes as you run often results in bruises under your toenails. These turn an ugly shade of black and your toenails often fall off! Not pretty.

By the way I had a pretty good 2020 season, even if the racing calendar was interrupted by COVID19, and am pretty confident the trophy will once again grace my bookcase in 2021.

The trophy is worthy, but ugly. It’s actually an old mahogany foot-shaped ashtray, replete with black toenails. And it started off life as a re-gift joke between my run club coach and a friend of his. One birthday he received a present from his friend. The ashtray foot and its black toenails. The next Christmas, as a joke, he re-gifted it to her.

You can guess what happened. The next couple of birthdays and Christmases it went back and forth. Eventually the re-gifting joke ran out of steam and the foot was mounted on a black board with tasteful lettering and a yearly hall of fame list. Now it’s re-gifted each year to the club’s best performing runner.

Christmas is a time that many people re-gift the gifts they received one year, but stuck in the bottom drawer for use later. Out they come some time in late December, rewrapped and ready to hand on. Hands up if you’ve done that!

But there’s some precedence worth following. In fact the very first Christmas story begins in Luke’s Gospel with the story of a re-gifting. God takes a gift he has given elsewhere at another time and he re-gifts it in another time and place. Have a look at the start of the story in Luke 1 and I will show you what I mean:

In the time of Herod king of Judea there was a priest named Zechariah, who belonged to the priestly division of Abijah; his wife Elizabeth was also a descendant of Aaron. Both of them were righteous in the sight of God, observing all the Lord’s commands and decrees blamelessly. But they were childless because Elizabeth was not able to conceive, and they were both very old. (Luke 1:5-7).

This is a repackaged story. A re-gifting. And that's deliberate. The Bible begins the account of God’s promises to the nation of Israel with an old childless couple, Abraham and Sarah. The words “but they were childless” in Luke 1 are not just designed to tell us they had no children, but that something deeper was wrong, something deeper in the nation that their childlessness betrayed. And just as importantly, something that has happened before.

So what’s wrong? Israel is out of hope, out of life, and seemingly out of a future. Just as these old childless couples are, so too Israel. And that’s the point of Luke’s story. The gospel writer is ringing a bell that should point us back to the first time a childless couple is mentioned in the Bible, and then on to what God is going to do about it.

And what is God going to do about it? The story goes on:

… the angel said to him: “Do not be afraid, Zechariah; your prayer has been heard. Your wife Elizabeth will bear you a son, and you are to call him John. He will be a joy and delight to you, and many will rejoice because of his birth, for he will be great in the sight of the Lord. He is never to take wine or other fermented drink, and he will be filled with the Holy Spirit even before he is born. He will bring back many of the people of Israel to the Lord their God. And he will go on before the Lord, in the spirit and power of Elijah, to turn the hearts of the parents to their children and the disobedient to the wisdom of the righteous—to make ready a people prepared for the Lord.” (Luke 1:13-17)

God sends an angel to Zechariah to announce the birth of a child who will re-ignite God’s salvation plan, a plan that has seemingly gone silent in the 400 year gap between the end of the Old Testament story and the start of this one in Luke.

And that’s what God did with Abraham and Sarah too. He sent messengers to them - which is what the word “angel” means - to tell them they would have a son. And that son would be the start of a chain reaction - a series of constant re-giftings - which would eventually lead to the whole world being blessed.

In fact as you read through the Old Testament story we see childless couples all over the place who are suddenly blessed with a child, and that child goes on to advance God’s plans to bless the world. God re-gifts time and time again.

In the Abraham story it is Sarah his wife who does not believe, but instead laughs at the very idea of having a child at such an age, and in this story it is Zechariah who isn't so sure. His unbelief does not result in the loss of the child, but in the loss of his speech until the child is born, as the story tells us.

But when his son John is finally born we see the pinnacle of God’s re-gifting, as Zechariah utters these words with his re-loosened tongue:

… to show mercy to our ancestors and to remember his holy covenant, the oath he swore to our father Abraham: to rescue us from the hand of our enemies, and to enable us to serve him without fear in holiness and righteousness before him all our days. (Luke 1:72-75)

Abraham gets a mention. Zechariah realises that God’s re-gifting in an obvious way by leaving the same packaging and name tag on, a faux pas we would take great pains to avoid!

But not God. He wants everyone to know He is re-gifting his promise to bless the world through Abraham.

Which tells us a few things.

First, God does not have a Plan B. If this is God re-gifting the same promise at the start of the New Testament Christmas story, then God doesn’t have a Plan B for salvation. God only has one plan - and that’s Plan A, the plan to bless the whole world through the descendants of Abraham. God’s plan was not thwarted by all of the crazy stunts Israel pulled in the Old Testament, where they disobeyed him and seemingly lost hope, life and a future. Those things are still on offer for Zechariah and Elizabeth.

But secondly, it tells us that God’s gift is not earned by our own efforts. Both couples are childless and old. Nothing in their own strength can gain them God’s promises. Only God can gift that promise and then re-gift it again to others. The point of the promise of God is that it comes to those who feel hopeless, lifeless and seemingly short of a future.

Which means us too. Which means we can’t earn it either. You see The Black Toenail Award is different to God’s re-gift in this significant way: It has to be earned. It has to be earned by my ability and success. And my ability and success may not be enough next year for me to be awarded it again. It’s all down to me. I may fail. I may lose out on the trophy because I'm not good enough.

Not with God's re-gift. You cannot earn his re-gift of salvation. You aren’t good enough to do so. In our own strength we are without hope, without life and without a future. We are as “childless”, so to speak, as Abraham and Sarah were, and Zechariah and Elizabeth were.

God comes to those who are without hope, without life and without a future and re-gifts these things to us. He takes our barren emptiness and gifts us fullness. That’s what Christmas is about - God giving us the ultimate promised son, His Son - the Lord Jesus.

What will you do with God’s re-gift this Christmas?