Can we live without transcendence?

Can we live without transcendence? 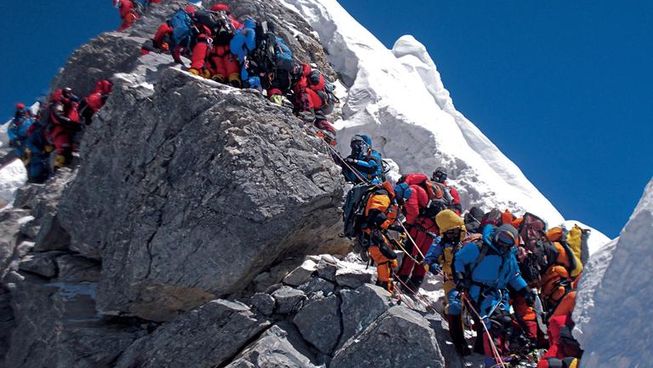 Seen that viral photo of the human traffic jam near the summit of Everest? In another setting it’s just a Coles checkout queue, only without another checkout to jump to if it looks like it’s moving quicker.

The photo has launched a thousand articles (a thousand and one now), mostly about how the mountain has become just another bucket list item for wealthy adventurers.

Eleven climbers have died this season already. For them it was the last thing they ticked off their bucket lists. Climbers bodies are left where they fell on the mountainside. Go on google it, it’s sobering stuff.

So why this and why now? Why has Everest become as jam packed as the Pacific Highway on a long weekend? What is compelling people?

Why not settle for the other tall mountains? The second tallest - K2 - for example. It’s positively serene compared to Everest. Then again the second man on the moon doesn’t have the same ring to it. That’s Buzz Aldrin, by the way, just in case you were going to google that too.

There’s something about transcendence in all of this. Something about reaching to the very pinnacle. Something too about what we call “a source of distinction”, where we measure our level of authenticity by how so few other people live the life we live, craft the way we craft, experience adventure the way we do.

And Everest offers authenticity in bucket list loads, if it wasn’t for all those pesky other people threatening my levels of authenticity! It’s like that villain, Syndrome, in The Incredibles, who, out of jealousy, aims is to give super powers to everyone because “when everyone is super, no one will be.”

So when I look at that picture I see something else. I see everyone aiming to be super. Everyone aiming for the top. Only it’s not the top is it. Beyond the pinnacle there is blue sky. It’s the top of the world, but then what?

The top of the world, then what? We could apply that to so much of our lives. The top of our career world, our relational world, our identity world, our whatever world is the world in which we find a deep source of meaning.

Yet when you’ve done it, when you’ve achieved it, what then? Wimbledon champion Boris Becker recalls that, after his first victory at the tender age of 17, he stood on the terrace of his London hotel room tempted to jump to his death. “Is this it?” he was thinking.

In our modern secular world in which the idea of transcendence has been relegated to the sidelines, it’s becoming clear that actually we cannot live without it.

We can’t seem to simply live “ground floor lives” that lack a second floor. We’ve been told that if we cut ourselves loose from the transcendent, from God, from religion, then we’ll be able to enjoy life here and now in the moment. Yet there’s a hankering in us that betrays that we can’t.

Our Western culture has never been more secular - publicly at least - yet never so anxious, never so driven and unsure of itself. And this cannot be for lack of opportunity or choice. The queue snaking up the side of Everest surely tells us that opportunity and choice abound. What we are lacking is meaning and purpose. And we will go to any lengths, and, clearly, to any heights to find meaning and purpose.

Next time we’ll look at a viable option for discovering meaning and purpose that can survive the descent.