Sicario: Day of the Soldado

How should we respond to the anti-hero?

Sicario: Day of the Soldado

How should we respond to the anti-hero? 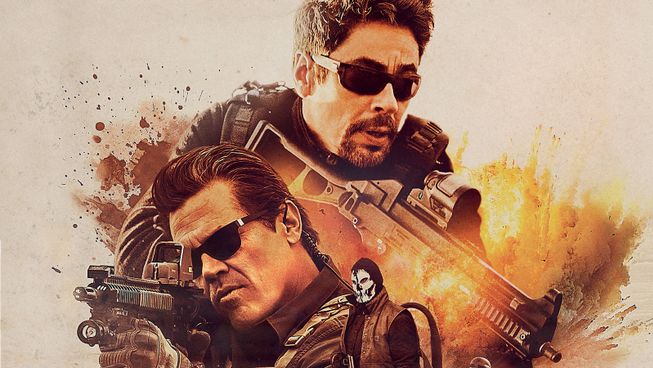 The modern day western has manifested itself in the dusty townships in the desert plains of Texas and it’s bordering states, but moves law enforcement from horseback to riding a four-wheel drive truck. In amongst the over-exposed yellow and brown tones, most of the crime-fighting occurs against the villains of the drug cartels who manage their empires from magnificent estates somewhere in Central or South America. The tales cannot be broken down into a world of white or black hats, but resides in the realities of a world of moral ambiguity.

No one has captured this modern take on this familiar genre better than writer/director Taylor Sheridan. With his debut being the critically acclaimed Sicario and his masterful follow-up Hell or High Water, the actor turned writer has touched on raw and visceral themes that Hollywood has been trying to invigorate since the death of the western in the 1970s. His writing manages to capture the ever-churning hearts of man and the struggles in this world of technology, immigration and the battles against evil.

Even though the original film was not a huge moneymaker, the acclaim it garnered and the character-rich atmosphere of the war on drugs allowed the sequel to receive a green light. Emily Blunt (A Quiet Place) does not return for this instalment where the script’s focus turns to Benicio del Toro’s hitman, Alejandro Gillick. Partnering with the CIA’s Matt Graver (Josh Brolin) as they look to halt the drug cartel’s latest commodity, the citizens of Mexico. In amongst those who are trying to cross into the US for prosperity, the government is trying to stop the illegal infiltration of terrorists.

The solution for the anti-terrorism team is to start an internal war amongst the different drug lords. They enact a false flag operation by kidnaping Isabela Reyes (Isabela Moner), the daughter of the head of the largest cartel and blame it on the rival drug lords. Everything begins to come together, but the corrupt nature of the Mexican authorities cause things to spiral out of control. Agent Graver and his team must determine what side they are going to take in this battle and determine how to save Gillick and Reyes. While the agency wades through the international implications unfolding, the assassin finds himself trying to save the life of his former enemy’s daughter and experiences the trials of the Mexican/US border.

Despite the familiarity of the characters and situations faced by law enforcement, Sicario: Day of the Soldado proves to be a reimagining of this storyline. Without Emily Blunt in the lead, Sheridan takes the opportunity to develop Brolin and del Toro’s personas. The first act is a time of adapting to the change of the primary characters and how the focus of the missions move from terrorism and drugs to the issues surrounding human trafficking. Once these elements are established, then the film manages to gain momentum and allows the audience to get invested in individuals on-screen. These veteran actors are at the top of their game and manage to deliver the needed masculinity and charisma to carry the film through to completion.

Italian director Stefano Sollima fails to live up to the visual excellence and dramatic tensions of Sicario, but few can measure up to the standards of his predecessor, Denis Villeneuve. He manages to keep the look and feel of the original, but without the vulnerability of Blunt’s character, he must rely on Isabela Moner’s performance to infuse some humanity into the film. The young actress proves to be a strong element in the story, but suffers from comparison to the veteran actress’ performance. In amongst differences within the chapters of this franchise, Sheridan does provide a separate narrative thread with Miguel Hernandez (Elijah Rodriguez) that proves to be critical to the conclusion. Unfortunately, through the first few acts this element is the weakest aspect of the script and proves to be inexplicably dull, until the convoluted finale.

Sheridan does manage to maintain his touch in the writing, even though it is not the strongest inclusion into his canon of work. Sicario: Day of the Soldado is an entertaining and timely film that proves to be the bridge to a reimagining of the western and the continuance of this potential franchise.

Reel Dialogue: How should we respond to the anti-hero?

In the world of the war on crime or terrorism, can morality truly exist? With only the cinematic world to consider, the question has to be answered with a strong maybe. Compromise has to play a factor in this world of flexible morality and manipulation, but at the core of this work there has to be a moral centre to drive people to continue this line of work.

The challenge is to know where to find this integral drive for justice or loyalty. Can it be merely found in the patriotic, familial, political or even in the monetary?

Most of us will never directly experience the effects of this level of morality, but we still have to determine right and wrong for ourselves. We can look to mankind for examples, but inevitably people do fail the true test for a moral code eventually. There was only one person in history who set the standard for morality and proved that no one else could completely hold to this standard. This may sound like a hopeless statement, but Jesus did not leave humanity without a solution to this morality juxtaposition.

Are you intrigued? Here is a link to a letter written by Paul called Romans, it opens up things on the subject of morality. It is a short read, but allows for consideration for where it bases your morality. Romans